Protestors took to the streets to show their anger that a Norwich disability assessment centre with no wheelchair access is still being used.

People with limited mobility have been sent to Ipswich and Nottingham by public transport and taxpayer funded taxis because the first-floor assessment centre, at St Mary’s House, in Duke Street, is unsafe for those unable to move easily in a fire.

A deal to use ground-floor rooms fell through last month, eight months after the government finally agreed to take action.

Disability minister Mark Harper has written to Norwich MP Simon Wright to say a new city centre site had been identified, but he could not say when the new site would be operating.

Dozens of people turned out to the protest after people were being sent from Norwich to Ipswich because of the inadequate facilities.

Marion Fallon, 53, was sent to Ipswich last July to undergo an assessment after “being messed about for months”.

She is now concerned she will face a new battle should she be called for re-assessment. Because she is not classed as being housebound, she is not entitled to a home assessment.

Although not a user of the building herself, Amanda Graham-Leigh, 45, turned out to show her backing for those who do need to use the assessment centre.

She said: “There are many people who would love to come out and voice their concerns but they are unable to do so – I am supporting them. “It’s not just about the people who need it now – you never know what is going to happen down the line.”

Meanwhile, Mark Harrison, 57, from the charity Equal Lives, who has been leading the campaign, said: “They have had three years to sort this out – it’s now the same circus with different clowns. We are now going to resume our campaigns.

“We will be here until they step up to their responsibilities to disabled people.”

Mick Hardy, Disabled People Against Cuts secretary, who has himself undergone assessment, said: “It is not just people being sent to Ipswich.

“Some people are being sent to Nottingham. We are back to square one so we are going to carry on what we have been doing.” 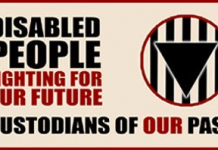 Inclusion London are seeking a talented, experienced and versatile Communications and Media Manager to join our highly effective team and lead our communications & media work. More details can be found on our website ow.ly/JXPU50FqOWE pic.twitter.com/Bv94…

🚨New role available with us: Justice and Rights Manager We are seeking a skilled, highly motivated, and versatile Deaf / Disabled person to play a key role in the expansion of our Campaigns, Justice and Policy work. Closing date: 5 August 2021 inclusionlondon.org.…